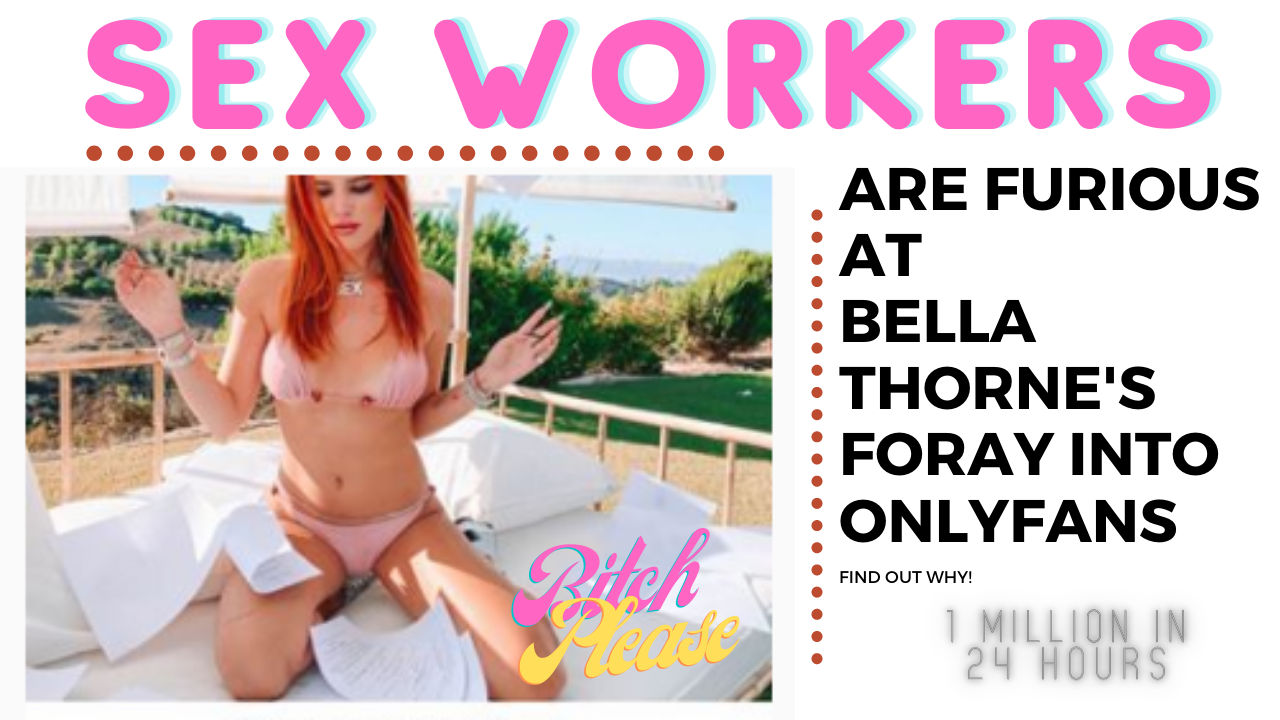 Recently former Disney star and trendy wanna be “sex worker” Bella Thorne started an OnlyFans account. She made a RECORD amount of money in very short time. But her presence on the OnlyFans platform has made MANY sex workers angry. Sex workers are talking about this on EVERY media app you can imagine! Read on to find out what this bitch did.

Bella Thorne joined OnlyFans and made ONE MILLION dollars in tips, PTVs and subscriptions IN ONE DAY. She apparently made 2 million there in her first week alone. A lot of people make a LOT of money on OnlyFans but this is a record by any standard. So why exactly is this making SEX WORKERS-who make up the foundation the house of OnlyFans was BUILT upon-so damn PISSED OFF?

So WHY are Sex Workers so PISSED OFF at Bella Thorne?

Number 1: Taking over a space where sex workers are able to support themselves. A LOT of SW’s come from larger marginalized communities. Some are in this line of work for SURVIVAL, not to earn extra money when they already have many other means for such. Sex Workers worry the OnlyFans platform (which is currently one of the BEST, most well known ways to make ends for multiple TYPES of SW’s) could get taken away from them.

Number 2: Immediate changes to Onlyfans! A little background on this one first. An Onlyfans PPV is a Pay per view/PPV message that COSTS to open. PPV messages are normally reserved for “spicier” pictures that aren’t posted on the normal subscription feed.

This is how MANY OF-ers make so much money. By selling more explicit or “better” content via these PPVs you can add a LOT to your takehome pay and SW’s LOVE this feature. Well Bella Thorne apparently sent out a $200 PPV to her fans in which she promised she was NAKED. The picture buyers received for that 200 dollars was basically an instagram level censored photo. The pic didn’t actually SHOW anything we could not normally see of her. Sure she was NUDE, but the picture was basically something you could see in any PG website or magazine.

There were probably a LOT of “chargebacks” (people asking for their money back) from this ruse. So now Onlyfans has altered the limits on what accounts can post. Onlyfans is NOT confirming this is because of Bella Thorne’s account but WE know better, right? Sex workers are discovering a $50 PPV message limit, a $100 tip limit and a standard 30 day payout period. These limits will seriously affect the monies sex workers are used to making on OnlyFans. In other words WE are paying for HER bullshit. This leads me to number 3 of why sex workers hate Bella Thorne right now.

Sex Work is not a role you can “study” for

Number 3: PERFORMATIVE BULLSHIT aka “researching a role.” Sex workers are mostly LIVING this life full time or partially. Bella Thorne wants to PRETEND she is a sex worker while researching a role. This is pretty common for actors EXCEPT they dont normally make huge accidental negative changes to the community they are “studying.”

Bella Thorne told the the Los Angeles Times via text that she is using OnlyFans to conduct research for an upcoming film she’s working on. “It’s a feature we are researching as I’m living it currently,” Thorne told the Times via text. “What are the ins and outs? What does a platform like this do to its users? What’s the connective material between your life and your life inside the world of OnlyFans? … How can it change your life for the worse and the better? How far are you willing to go, and how far do you WANT to go? You can be me, or this talented girl from Montana, and OnlyFans could change your life — if you want it to, of course.”

As sex workers we know this is some old fashioned BS. It is VERY trendy and kind of “fashionable” in a way to be a sex worker right now, be it for political cache or to do something “mommy would hate.” Those who get into sex work for these reasons sometimes leave a sort of “scar” on the scene that seems to affect sex workers who are in it for the long haul or just to make a living and get by.

Sex work can be seen as “fashionable” to those outside of it sometimes.

So what do YOU think of all this Bella Thorne OnlyFans stuff? Has it affected YOU yet? How will the changes at ONlyFans affect YOU? Onlyfans has NOT confirmed these changes are because of Bella Thorne. Do YOU think they are? Reply in the comments OR on twitter. Follow Findom Lifestyle .@LifestyleFindom Get involved in the conversation!