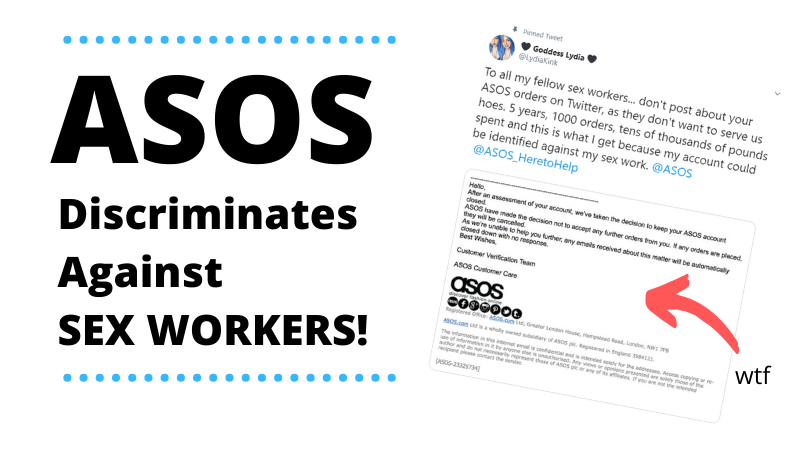 The popular UK brand and online retailer ASOS is now officially branded as a brand who does NOT support sex workers…and you know what THAT means. Sex Workers officially don’t support THEM. So what are the charges? Are they damning enough to keep Sex Workers at large from buying their clothing and supporting their business? Read on to find out and see if you agree.

All the best sex work gossip and networking happens on Twitter. And it was on Twitter this week that I saw THIS tweet from Goddess Lydia, a ProDom and multifaceted SW from Brighton, UK:

In my view all I can do is take Goddess Lydia’s word for it, but from the looks of things she was even BANNED from further purchases from ASOS simply for being an out and proud Sex Worker. According to the letter I have seen here (which does NOT mention sex work) they no longer will even let @LydiaKink even BUY things from them. Undoubtedly this fueled the immediate ire of the SW community. We are an ACTIVE community and take pride in supporting each other as well as supporting those who support US.

I personally choose to support Lydia’s take on the situation: She is experiencing discrimination. Now here’s the part that personally made ME alarmed (and angry). ASOS not only closed her account…and do take note that nowhere in this correspondence does it say anything about some type of MONETARY discrepancy and so on. It is based on review of “her account” AKA HER and ASOS says they will cancel any orders Lydia even TRIES to place via them.

Of course this is bad business for so many reasons but it also appears to be blatant discrimination. The letter/email from ASOS does not mention Sex Work or occupational status but it mentions reviewing her account and shutting it down. THEN further mentions it will automatically delete her correspondence as well.

Can you imagine being treated this way simply as a customer? Would YOU support a business who treats customers of ANY type this way?

Can you IMAGINE being treated this way? Being told a company won’t even let you correspond with them, order from them and so on? In other words, you no longer EXIST in their eyes. This is how they view your business. Well friends, this is good enough reason for ME to no longer purchase from them. Moreover the very fact that they are purportedly discriminating against SW’s (the letter itself does not mention the WHY but I can read between the lines).

Further beyond THAT they are the type of company that will take your business for years then later tell you that you cannot order from them OR even correspond with them…well this is not a business I would or will support. Sex Workers are a growing demographic with serious purchase power. We are politically active. We network. Sex Workers are the exact market that a wise business would COURT in 2019 and beyond. Yet we are frequently ostracized and discriminated against despite our purchasing power and politically active status.

But the REAL icing on the cake? ASOS has a brand marketing campaign right now based around “the freedom to be you.” The following is taken from the ASOS website’s “about” aka Who We Are page: “We believe in a world where you have total freedom to be you, without judgement. To experiment. To express yourself. To be brave and grab life as the extraordinary adventure it is. So we make sure everyone has an equal chance to discover all the amazing things they’re capable of – no matter who they are, where they’re from or what looks they like to boss. We exist to give you the confidence to be whoever you want to be.”

ASOS invested in the concept of personal freedom and being yourself only to DENY that concept to Sex Workers via a block in purchasing rights. Maybe they think it is “ok to be you” if you do it quietly or do it by being something “more savory” than a Sex Worker. In turn I plan to boycott this business..and I buy a LOT of clothing online. Including that from UK. They have lost MY business and I don’t know that they can get it back after this.

WE SEE YOU, ASOS.

What is YOUR opinion on the way ASOS treats Sex Workers? has this ever happened to YOU? Have any brands or businesses discriminated against YOU for identifying as a Sex Worker? Leave a message in the comments!