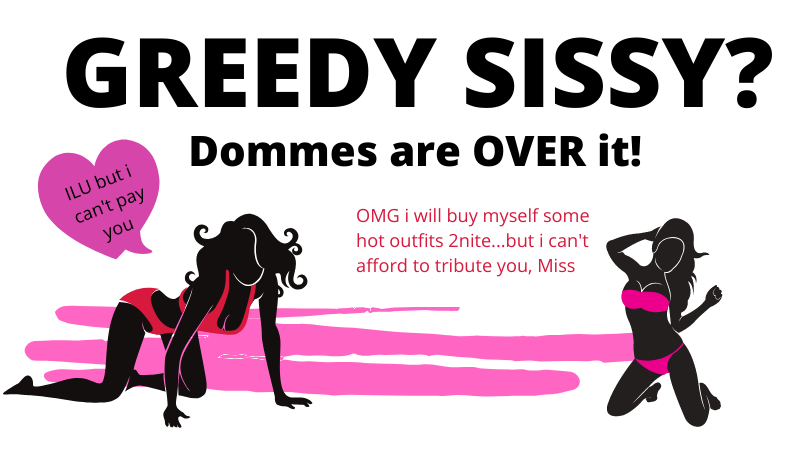 Now to be fair, the Dommes who hate sissies have ALWAYS been part of the scene, especially online. This really is not anything new per se. BUT as of late the Domme scene as a whole has been more vocal about it. I see more social media annoyance with sissies than in years past. It would seem the online domme scene is really getting fed up with the sissy bitches who relentlessly pursue their kink, one domme at a time. Consequently there are more and more posts and tweets sharing the cheap/greedy sissy hate sentiment, many of which are met with a rousing amount of agreeance from fellow dommes who have JUST. HAD. ENOUGH.

Lately sissies online have become the object of domme dislike

Here are some of the things that seem to DRIVE DOMMES NUTS. Firstly sissies often appear very greedy, wanting lots of time and attention without putting up the effort or money to make it worthwhile. There are a lot of “community whore” type sissies, meaning loyalty is NOT their intention. They want to serve MANY Dommes. This is not a bad thing in MY mind but for many dommes it is not worth their time to invest in a low paying bitch who isn’t even loyal. And the NUMBER ONE thing that seems to drive dommes crazy when it comes to sissy bitches? The fact those sissies will buy themselves item after item for the kink yet claim to have NO money to send the domme who requires payment for the service of domination.

Undoubtedly this last one is THE thing that offends and annoys dommes over and over. It comes off as selfishness. And there are MANY many more things that Dommes could name about WHY sissies drive them nuts but the things I listed above are some of the big ones. Now keep in mind I am ONLY talking about surface issues here like money. Many dommes dislike the IDEA of sissification and find it insulting. This is NOT what I am talking about here. I am not talking about whether you agree with the kink in general. I am talking about the ACTIONS of sissies at large. The issue of “is sissification insulting” is an article we will explore another day.

Now those of you reading this probably already have feelings on the subject. Therefore you already know WHAT a sissy IS. However let’s take a sec to quickly break down sissification and the appeal of being a sissy. I am taking this quote straight from Wikipedia ya’ll : “In the context of dominance and submission or kink subcultures,….sissification, refers to the practice of dressing a submissive partner as a woman and/or encouraging or training them to act in a feminine or exaggeratedly feminine (“hyperfeminine”) manner. If male, the submissive partner may be called a “sissy.” Not bad, eh? Sometimes wikipedia actually comes through pretty damn well.

Forced Feminization is a popular expression of sissification kink

Now on to how it all applies to US. Sissification usually involves some type of crossdressing that is typically “forced” upon the sissy as a way to emasculate them or as a show of dominance from the “D-type” partner (domme). Because of this emasculation aspect, humiliation is often part of play too. Now I am not saying all sissies are into humiliation or emasculation but they are more often than not involved on SOME level (at least from MY experience anyways). Some sissies are also into the submission aspect of play as well BUT NOT ALL sissies feel this way. Like any kink it is deeply personal and has as many variations as you can imagine. These variations can get super specific.

So now let’s talk about something you might want to realize before playing with sissies. NOT ALL ARE SUBS. I know most dommes THINk of sissies as submissive, but really only a portion are. Some are simply fetishists. Realizing this can make them easier to play with. When a domme expects submissive behavior form a playmate and doesn’t FIND it then the playmate seems lame. But when you stop to realize that you might just be playing with someone within their FETISH and not as part of submission it can suddenly make things seem more fun.

Many sissies are not actually submissives…they are FETISHISTS

Many sissies you meet online are ones who are only sissies late at night when they have a hardon. As a working domme online you expect this type of thing anyways. But realize that the sissy you are speaking with might not be looking to submit to you. Instead that sissy is looking for someone to encourage them further in their fetish. When you start to view it this way then things change for you. You, as the Domme, as no longer searching for submissive acts from them. You are now giving them direction in how to BE a better sissy, how to EXPLORE this thing theyre after.

I personally find sissies to be a GOLD MINE. I used to dislike them and the fetish itself but have grown to love it over time. If you are finding sissies to be greedy then simply limit your play with them to strictly moneyed methods such as Niteflirt or prepaid kik sessions and so on. If you keep your interactions with sissies strictly on paid platforms you might grow to love them. I find everything about it to be fun and have had many great sissy SUBS (yes there really are lots) as well as playmates. I am just more open minded about the range of sissification from MY end.  And I tweaked my way of playing with them so that it did not become a DRAIN for me.

Sissies are great about sharing the mindset that makes their kink exciting. This can be profitable for Dommes

Another really good thing about sissies is that they are usually very open about sharing what makes them tick. Knowing what things make your subs excited or what types of things interest them regarding their kink is very valuable. As a domme you need to be able to “see” into the minds of those you are domming. Without a doubt sissies are one of THE most open and expressive groups when it comes to their kinks.

Take advantage of this and learn what turns them on. It will of course be very profitable to do so. I have found them to be very generous and ready to put money in MY pocket when I make the effort to use their triggers. Just be sure to monetize your time if you feel the need. But that is advice for ANY interactions, not just those with sissies. Have fun with it and get paid. Give them a chance and be picky about who serves you or who you pay with. Money cannot make up for a really bad experience; those memories last forever.

Do YOU like playing with sissies or do you think they are a pain in the ass? Comment and share your experiences with domming them! Have thoughts on the kink of sissification? Think it is right or wrong or something in between? We will be doing an article on that in the future. Until then SHARe your thoughts in the comments OR on twitter with Findom Lifestyle’s twitter account..and follow us while you’re there, too!