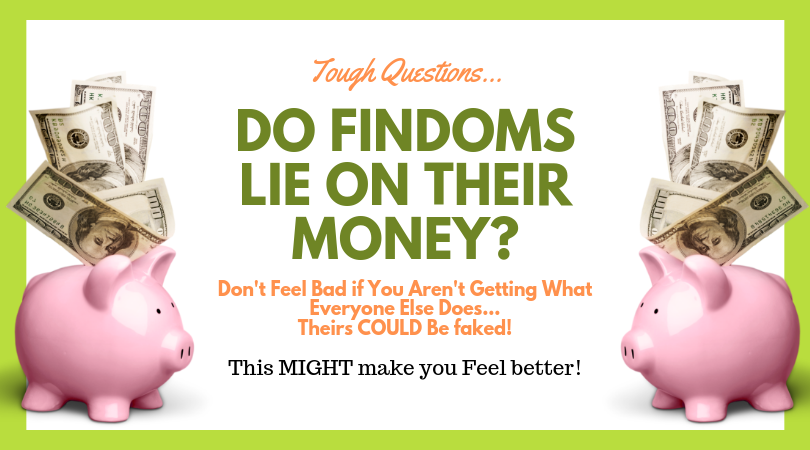 Since day one of the online findom scene, there have been findoms lying on their money. Some will file it under the adage “fake it til you make it” and some are just straight up scammers. It is nothing new and the BS is as creative as it is prolific. BUT not every single MONSTER sized tribute you see is faked-they really DO happen. Read on for what this means to YOU and to the scene at large.

So here you are working your ass off to get noticed and gain pay fans or subs. Around you seems to be all these findommes getting massively PAID. one day after the other they have new subs or are getting 4-digit tributes. Not once, not twice, but over and over and over. Maybe you are a new domme and you are wondering “WHEN is this going to start happening for ME.” Then again maybe you have been around for years and say to yourself “how come I never get this kind of stuff…is something wrong with Me? Am I doing it all wrong?”

Why is everyone else making MORE than Me?

Seeing all this SUCCESS happen to everyone but YOU is enough to make you feel like quitting sometimes. But never fear, I know a SECRET and I am about to pass it your way. A LOT OF WHAT YOU ARE SEEING IS FAKED! For real. A lot of these tributes are totally made up in order to “look legit.” Sometimes they are shown in hopes the Law of Attraction or Fake it Til you Make it will bring them riches.

In this world of online play it is now TOO EASY to make picture edits. Many people know how to use photoshop like programs to generate up images of anything they please. WHY would they do this? Sometimes it is for the clout. They think the clout factor will bring in more money. It is possible they also think it will bring attention to their accounts. Maybe they hope that it will come true if they present it as being their life. Maybe they feel JUST LIKE YOU and are sick of NOT getting those things and want to look like they DO.

Many findommes get involved in this scene for the SOCIAL aspects of it versus purely the domination aspect. They like the “sorority” feel of talking to fun peers all day long and have put more time into THAT than into actually hustling. Sometimes they will want to “show” that they are indeed badass dommes who get paid and will make ways to show it to their finfriends. These dommes were more into the online fun of things versus actually acquiring subs. sure they LOVE the money too, but for some that is more like a side benefit to being in a sort of “cool scene.” To each their own!

Then again, for some of those who fake big tributes it is about trying to MAKE that life for themself by SHOWING what they want to be. Sometimes it is to make themself feel better for what they perceive as a lack of success. Believe it or not, I am NOT here to judge on that. This is more about letting YOU know that you have NOT failed.

AND YES, plenty of times these tributes are REAL. IT HAPPENS. There can be findom “whales” who send large tributes. Some findommes just have fantastic subs in a position to be generous. But the point is, it is NOT always what it seems. Think about when you look at instagram and all you see is gorgeous women. I’m talking BEAUTIFUL women with snatched waists and perfect skin and more. Well it is common knowledge that many of them are using facetume or other software to make themselves look better. They are beautiful but they FAKE a lot of the PERFECTION.

In a way it is kind of a relief to know it is fake, right? It somewhat takes the pressure off of YOU having to lead this kind of life. So don’t let these bigass tributes make you feel inadequate. Maybe they were totally faking it…IT HAPPENS.

Want to see for yourself some of the funniest or most outlandish instances of FINDOMMES FAKING IT? Read thru THIS twitter thread. As you look through it you can see various dommes offering some of their favorite BUSTED stories. It includes things such as dommes telling OTHER dommes advice such as: FAKE TRIBUTES and here is how to do it…and MORE. Read through it and see story after story of things that happen in the community.