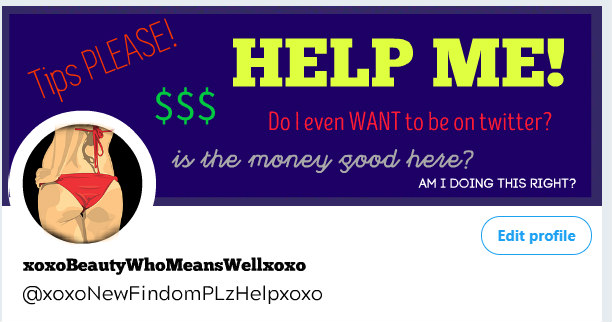 This is the first in a series of articles about using twitter for your FINDOM gains.

Oh, the joys and pain of Twitter! You either love it or you hate it, but if you are a Findom you probably view it necessary or at least useful. Not using Twitter yet as part of your Findom game? Read on for some Twitter thoughts that might just change your mind…

Obviously social media is a huge part of all day to day life for the majority but for a Findom it can be a CRUCIAL aspect of your “game.” What do I mean by game? I mean HOW you make your money and do your thing as a domme. That probably sounds like a very broad definition and it IS. However there are so many facets to how we dom and get tributes, who is a Dom/me, and the many WAYS we go about our domming styles that only a broad definition can be used. But no matter how differently we view twitter the fact remains it is one of-if not THE-most popular ways to advertise yourself as a findom.

Twitter has a few things going for it that make it worth being on. However ONE aspect stands out above all others: it allows for adult content. Matter of fact, go to the google play store to download the twitter app and you will notice right away that it is rated “MATURE.” Perhaps you do not realize WHY this is so important but we are living in the days of FOSTA/SESTA style unfriendliness towards adult content and sex workers in general. So any site that openly allows for adult type content is one worth using. Now don’t get me wrong, twitter does plenty of banning and shadowbanning of accounts they consider controversial and we all know a sex worker’s account is always going to be teetering on the edge of controversial. BUt this is still much better than those social media sites which do not openly consider themselves as mature sites (think: perennial SW account banner instagram). Right away this gives Twitter the EDGE when you are using social media for promotion as a findom.

So in addition to the “adult content” factor there are 5 main reasons WHY twitter is so valuable for findommes and really all sex workers (especially content creators!).

I will go into these areas in greater depth in future articles including tips and tricks,but let me go ahead and give you some of the lowdown on them now while I’ve got ya here.

Good old fashioned advertising. You want tributes. You HAVE to find places to show who you are and why you are online. You have to have places to show previews for your online content such as clips, blogs, sites and more. You have to be able to find places online where you can show yourself and what you do in order to attract the subs and tributes.

Speaking of showing who you are, BRANDING is EVERYTHING. Twitter gives you the chance to set your brand through comment after comment and small bursts of personality. I know you might be reading this and saying to yourself that branding is just a buzzword. Even though it might be a trendy concept it truly IS absolutely essential. Branding is how you set yourself apart from the crowd. It delivers WHO you are and what you are about as a findom. The microblog nature of twitter is the perfect place to put yourself out there and show your unique mindset and more. Setting yourself apart from the other findoms while claiming your identity helps mark out your space and turf in this world. Never underestimate the importance of branding. Look for LOTS more on this topic in future articles here on FL.

ON to networking. Clearly we all like being in the know and navigating the SCENE of findom at large. This is where networking comes in. It is never ONLY about what you know in any business. WHO you know is truly just as important. My good relationships with other Dommes have led to many opportunities. Everything from tributes to new subs to expanded reach of my profiles has come to me via my good relationships with other Dommes. THAT is the type of thing networking can DO for you. Findom is a huge scene and gets bigger every day. KNowing the others in this scene truly can lead to good opportunities as well as an AMAZING support system. Underestimating networking can make you lose out on big things in findom and honestly pretty much anything else in this world..

So after you find great subs to tribute you then you will need to EXPAND that relationship and keep the dynamic going. If you DON”T then the tributes could stop flowing your way. I KNOW you don’t want that. So where in the hell can you find a place to play with some of the subs and bitchboy types? You guessed it-good ole twitter. Have a sub who craves public humiliation and becomes very generous once you engage him using his weakness? Well twitter could come in handy for that. Maybe one of your subbies gets hard everytime you BRAG about how he tribs you. Well if you were to brag on twitter where LOTS of others might see it then it could lead to a cycle of MORE tributes coming your way. I think you can see where I am going with this. And WHO is going to “like” and comment on your tribute pics to help you milk your sub? The findoms in your network of course! Now I bet you can see HOW all this entwined twitter action is going to help you in the long run.

Speaking of the benefit of all these interlocking principles, we have come to the last of the 5 points. Twitter has a DEDICATED findom scene! What do I mean by this? I mean there are not just a few findoms on twitter. There are a whole damn BUNCH. Not to mention how many subs are on twitter daily, poring over findom profiles. There is not just SOME findom action on twitter, there is an entire scene. There are findom memes and gossip and networking and hashtag groups and so on. It is something you simply do not want to be left out of.

More expanded coverage of HOW to use twitter and ways to maximize your gains from it is coming in the future. I think these concepts should be enough to convince you to use the site and really work it. Even if you are very active on twitter already it can be a good idea to explore new ways to use it or the assorted viewpoints others might have that shed new light on HOW to benefit from it.

Are you starting to see WHY I feel so strongly about twitter? Even if you already use it I think it is always good to take mental stock of WHY you should continue to do so. A lot of findoms find themselves disliking twitter because it has a lot of potential for drama. BUt hey, that is why they made a block button. Never be afraid to use it. Remember WHY you are there: to make money and promote yourself, NOT to play around in the drama mines. Like anything else, findom requires FOCUS on what you really want. Whatever you focus on is what you will get. Stay away from drama and be fast with that block button and twitter could REALLY pay off for you.

Twitter has strong value in the findom community and it could become the setting for you to finally GET THAT BAG!